Unfortunately, we live in a world where way too much food goes to waste on a daily basis. In fact, in 2018, the world collectively wasted approximately 1.3 billion tons of food! It goes without saying that those statistics are absolutely absurd, especially when you take into consideration how many people are starving to death all over the world. While we’d like to say that coming to a solution for the incredible amount of waste that we produce is easy, there’s a bit more to it than making sure that you eat all of your dinner each night.

How Food Are Wasted? 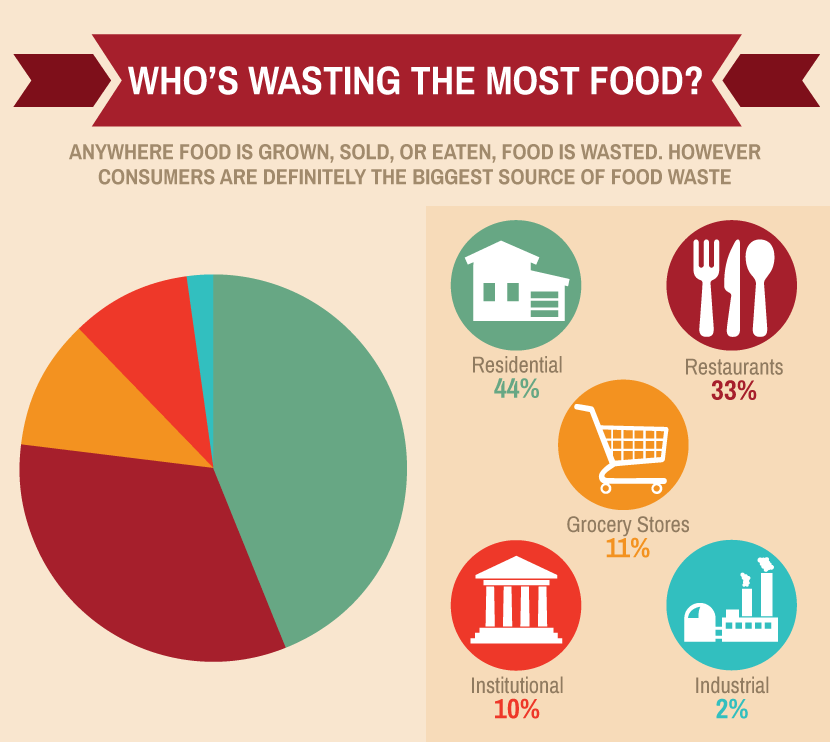 At this point, you’re probably thinking “they’re making food, so how are they wasting food?” Well, the answer to that comes in a few different forms. First off, there’s a bit of food loss when it comes to spillage, meaning that the food has touched the ground and has to be thrown away. There’s also waste in agricultural production when the harvest doesn’t produce healthy crops. Finally, agricultural production can face waste when they lose animals due to death. Needless to say, those that are working in the agricultural industry have to deal with a lot of waste if they’re not careful. Waste occurs during the post-harvest handling and storage typically because of transportation issues between the farmers and the distributors. You can’t exactly sell produce if it’s been sitting

in a truck for days at a time. Also, a lot of food is wasting away because of the lack of storage facilities. If there’s no place to store the produce, then it will just sit there to rot, unfortunately.

When it comes to food being wasted during the food processing stage, it’s typically because of spillage problems. While meat is being slaughtered, it can often land on the floor or fly away from the person doing the job. When this happens, all of the meat needs to be thrown away. The same can be said for produce that’s being peeled, washed or sliced.

One of the main causes of food waste in the distribution sector is food not actually being bought. If the food isn’t bought, for whatever reason, then it just rots and goes to waste.

This is where you come in. For some reason, people feel the need to buy way more food than they actually need. And what do you do when you have more food than you can eat? Well, we’d like to say that people donate the food to those that are less fortunate, but in most cases, that’s not what’s happening. People are throwing away an unbelievable amount of food on a daily basis and there’s really no need for it when so many people are going hungry.

Why Should We Reduce Food Waste?

As you can tell, food waste is horrible for those in the world that are starving, but it also has a detrimental impact on the environment. Food waste not only adds methane emissions to the air, but it also wastes a whole bunch of money. Think about it this way: food costs money to grow, to manufacture, to transport, and to sell. When that food doesn’t get eaten, all of that money is wasted. Not to mention the money spent on having to transport the waste to the landfill to decompose.

There are clearly plenty of problems when it comes to food waste. Besides the fact that it’s morally wrong, it’s also extremely harmful to the environment. It takes an incredible amount of land – land that has been deforested and cleared of the animals that lived there – to provide enough food for all of the people in the world. Unfortunately, it’s a sad fact that so much land and so many animals have been sacrificed for so much food that ultimately has just gone to waste. Also, the food that is never eaten accounts for 25% of fresh water consumption globally.

When food is brought to a landfill to decompose, it decomposes without the access to oxygen. When this happens, it creates methane, which is 23 times more deadly than carbon monoxide! If you were to break it down, food waste is the third largest emitter of greenhouse gases after China and the USA.

It’s clear that we’re currently in a dire situation, but that certainly doesn’t mean that all hope is lost. There are plenty of things that each and every one of you can do to bring down the amount of food that we waste throughout the world.

People tend to buy way more than they need, and while buying in bulk is convenient, it leads to a lot of waste. You could try not going grocery shopping until all of the food from your previous trip is gone. You could also try sticking to your grocery list and not buying additional items because they look good at the time. A lot of people accidentally waste food because they don’t know how to properly store it. This is especially true when it comes to fruits and vegetables. Do some research to find out how to

properly store your produce so it doesn’t go to waste in your fridge. Here is the review article for you to choose a food storage container for your kitchen.

We all enjoy a good meal, there’s no denying that, but a lot of people have trouble controlling their portions. When you’re an overeater, you tend to overbuy, as well. If you keep your portions in check, you’ll not only feel healthier, but you’ll be less likely to throw scraps of food away.

Composting is a fantastic, environmentally-friendly way to eliminate some of the food waste that you produce in your home. Not only are you getting rid of the waste in an eco-friendly way, but you’re also creating nutrient-rich soil for your plants at home! Read the review on best compost bin.

Food preserving is a method of storing both raw and cooked food for an extended time by using food preservatives. Food packaging on the other hand, protects food and provides information regarding the packaged food. Food preservatives are substances added to food products to prevent decomposition due to adverse chemical change or microbial action. The main objective behind using food preservatives is to preserve the appearance, texture, flavor, edibility and nutritive value of the foods and also to prevent from food poisoning.

This is one of the oldest methods of food preservation. This process acts by reducing the moisture content in the food which in turn arrests bacterial growth. Drying is largely used for preserving meat. However, fruits and vegetables can also be preserved by this method. The additional advantage of drying is that it reduces the size and weight of the food product, therefore making it more portable. Sun drying, oven drying, and drying with the help of a dehydrator are the various ways used to reduce the water content of food.

Micro-organisms require a certain level of temperature for their survival. Freezing foods lowers the temperature to levels that make the environment unsuitable for microbial growth. This is the principle on which home refrigerators work. Cold stores are used to preserve large amounts of food stuff for a longer period of time, so that they can be used during a natural calamity or national emergency. The only drawback of this food preserving technique is its dependence on electricity. In this process, the food is first processed and then sealed in airtight containers. While the micro-organisms are killed by processing the food, their entry and proliferation is restricted by

canning it in an airtight environment. The various methods used to process the food before it is canned are pasteurization, boiling, freezing or vacuum treatment.

In this method food is stored in airtight containers that strips bacteria of the oxygen that helps it carry on with its metabolism. Hence, the growth of these micro-organisms is arrested and food is preserved. Nuts are usually preserved by this method. That type of vacuum is called vacuum sealer.

Sugaring is used to preserve fruits like apples, apricots and plums in sugary syrup that dehydrates the foods. The skin of certain fruits are cooked in sugar till they crystallize and then they are stored in a dry environment.

Salt is a natural food preservative that draws out moisture from the food as well as from the cells of the micro-organisms that may be present in it. Lack of moisture kills these organisms and hence prevents food spoilage. Salt is commonly used as a preservative in meat products.

Cucumber, beef, peppers and some vegetables may be preserved by pickling. This technique involves dipping the food in some liquid chemical that prevents the growth of micro-organisms but still maintains edibility of the food. The preserving liquids used are vinegar, brine, alcohol and some other oils. This process is known as chemical pickling. The other way of pickling is by fermentation. In fermentation pickling, the preservation agent is produced by the food itself during the process of fermentation. While we can all do our own part to reduce the amount of food waste that we produce, we also have to think globally and keep the corporations accountable, as well. Here are a few things that we should be doing to put an end to food waste, and ultimately, the unnecessary hunger that so many suffer from!

It’s a sad fact that grocery stores throw away an overwhelming amount of food that’s still perfectly good to eat. Instead of throwing the food in the dumpster, grocery stores, farmers, and production facilities could redistribute the food to different organizations like homeless shelters and food banks. There’s no reason why food should be wasted when so many people are going hungry each and every day.

We can’t get ahold of the food waste issue if we don’t know how much food is being wasted by each company. If we could implement a global food loss and waste management protocol then companies can be held accountable for the amount of food that they’re wasting.

Get People On Board

If people don’t understand that there is a problem, then they can’t do anything to fix it. It’s important that we make people aware of the food waste crisis that this world is in, and we can do this by launching consumer awareness campaigns. Showing people statistics and giving them solutions will typically make them want to be a part of the change. For example, grocery stores in the UK print storage tips on their grocery bags to help people properly take care of their food so it doesn’t go to waste!

It’s painfully obvious that the world has a major problem when it comes to wasting food, but that doesn’t mean that it can’t be helped. Each of us can do our own part by decreasing the amount of waste that we produce in our own household. You can start by buying less food, creating a compost pile, or even informing your neighbors about all of the things that we discussed today. Also, remember that knowledge is power, so do your research and get informed about what else you can do to make this world a hunger-free place!